My adopted family all come from a tiny village with a population less than 100. It has open fields of rice, sugar, rubber, bananas, and bamboo. The occassional chug of a rice tractor and Quiet - Yes; Much to do - No... 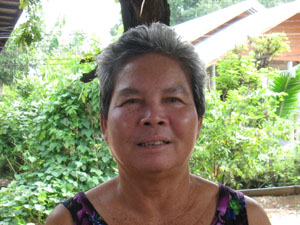 In loving memory of
Nang Nuan Jan Ladsa-Ard,
mother of seven,
Grandmother of thirteen.
A woman who earned the respect of her village peers.
Nuan Jan was everyone's mum.

She was also the kind of mum everyone wants. Everybody knew her and everybody was her friend. Almost all the village of a hundred or so inhabitants was in some way related to her. Nobody had a bad word to say about her. She was quiet and inoffensive, content in her life's work, and happy with her own life. It wasn't a perfect life. The man she married wasn't the perfect man and made sure she knew it but together they were the perfect Nan and Granddad and their home was the village meeting hall.

Yai came from a family that lived healthy lives and to a ripe old age. Two sisters and a brother but so many aunts, uncles, and cousins I can't count them all. If they weren't related to Nuan Jan they were married to one of her kindred.

The hospital cancelled the operation we discovered the next day. The tumour was malignant and Mae was terminally ill. Waan was phoning home every day from then on to get latest developments from her sisters. All she kept getting was more bad news. Over breakfast less than a week after getting back to England she told me she wanted to go and talk with her mum before she dies. I agreed and said she must go home and say goodbye to her mum because Mae surely knows in herself that she is dying.

A week went by and Waan had done nothing about going back to Thailand. I searched tickets and found good deals but she always had a reason why she cannot go yet. I told her off for it that she will regret it if her mum dies and she didn't get there in time. One morning I could hear Kanda talking to her Nan. Mae had phoned Kanda and was asking her to fetch her a glass of water. My mind was taken back to Mae staring into space and not bothering with the wedding and realised why, she hadn't understood what was going on around her, the tumour in her head was making her lose her mind. It struck me that Kanda had lived with her Nan for many years and Mae was recalling that period in her life. I asked Waan to call her sister at the hospital and make sure Mae has got a drink of water just in case, but I was worrying for no reason, they were looking after their mum. They had called Kanda in England because Mae kept asking for her. Little did they know how they had made her cry.

Another week went by and the hospital wouldn't release Mae even though she wanted to go home. It was so frustrating being seven thousand miles away and unable to do anything about it. I wanted Waan to go back and make her mum's last days comfortable, or at least to be where she wanted to be, but Waan kept putting it off.

Every Sunday Waan and I go to my mum's house for dinner. It has become a ritual that Waan enjoys because she loves Sunday roast, my mum enjoys because she is my mum, and I appreciate because it ensures I do not forget her. Each week my mum would ask Waan how her mum is and on the third Sunday I told my mum about Waan wanting to go home but won't decide when to go. My mum did what mum's do best, she told Waan off and told her she will be full of regrets if she doesn't go. To Waan my mum is Mae Yai even if she does call her Mary. She is to be listened to and when we got home that evening Waan asked me to look for tickets.

Because of work commitments there was only a choice of two, Tuesday afternoon or Thursday morning. Waan wanted the Thursday so she could organise herself for the trip but I convinced her to go Tuesday because it meant less time off work for me. It takes two days to get to Udon Thani and Lert was loyally there to collect her from the airport on Thursday morning. Sometimes I don't know what I'd do without that man. She sent me a text message to let me know she'd arrived and then the next morning rang me at work clearly upset and asking me to call her back. I did, though I knew what she was going to say, and it was so difficult to maintain some dignity listening to her cry. The last place you want to show any emotion is in the office in front of your colleagues and I wasn't tearful because Mae was dead, we knew that was coming, it is just the sound of Waan being so upset.

Kanda was at college and I didn't want her disturbed so I asked Waan to let me tell her. It was hard for Kanda to take and I offered to take her home for the funeral. She declined the offer saying it wasn't necessary. It was too soon for her to go home. And so Waan has to do this funeral on her own. Something that I will never forgive myself for because when she first came to me with a broken heart I promised her I would never do anything to hurt her. I don't think this counts as not hurting her. I know she needs me and I'm not there.

And so our mum, Nuan Jan Ladsa-Ard passed away on the 22nd of March 2013, a little over a year after Por Jon had died so suddenly, in a melange of confused mind, unimaginable pain, and a broken heart. When Jon died so did Mae's heart and a mere six months later she started suffering terrible headaches. Those headaches went on to blindness in her right eye, then deafness in her right ear. By Christmas time she couldn't talk or eat because of the pain in her throat and two months later she lost all her senses. She died from a destructive and cruel ailment for which there is no cure. She died from Head and Neck Cancer. And though I am filled with remorse for my letting Waan down I console myself with the knowledge that had I booked her for the Thursday flight she would not have had a final few hours with her mum. 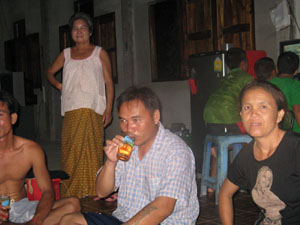 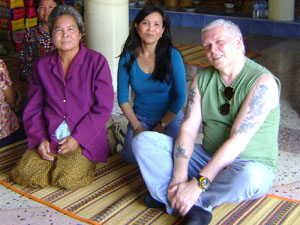 In the five years I knew her for I saw a woman who watched over her family with pride. A woman who was proud of her children's achievements and who took me in as one of her siblings. She commanded admiration and love from everyone who belonged to her but demanded nothing. Aloof, strong, and brave, she was brought down stricken by the loss of her husband, too many trips to hospitals, and too much pain to bear.

We all knew she had given up living months before she showed any signs of being ill. And when Waan arrived at the hospital in Kut Chap Mae told her she wanted to join her husband, that her life here is done, it was time to move on. She wasn't at all scared. Waen told Waan that Mae had been asking for her and she was sure Mae was hanging on till Waan came to see her. If that belief eases the pain of their loss then they should hold onto that thought. 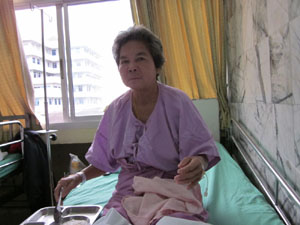 Mae was born in the village she brought her family up in. In the next street. Her younger sister still lives at the end of the same lane that Mae's house is in. She hadn't the benefit of a good education but she could read and write and was exceptional with money. Her favourite pastime was pheah thong, the same game as French Boules. I bought her a set of brand new boules because she wanted some so much and gave them to her just before Por Jon died. They remain unused in her cabinet. She never got the opportunity to break them in. Every time I visited I took her something to show my appreciation of her. Now I have to return once again to Thailand because I want to get a sign made in honour of Mae and put it on the side of Por Jon's Gut Dee.

It is Waan's birthday the day after I arrive. I have a lot to make up for when I get there...